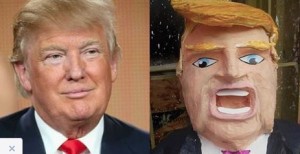 Let it never be said Mexicans have no sense of humor despite being vilified as criminals & rapists by the likes of Donald Trump. It could be said, they’re having the last laugh on that fool–& not just by sale of piñatas with his potato-head. Would that racist outbreaks were always met with such swift justice.

NBC, like Univision the Spanish-language network, severed all business relations with him & will not be airing the annual Miss USA & Miss Universe pageants. He will also not be participating in his signature show, The Celebrity Apprentice.

Donald Trump won’t soon be sent on sensitive diplomatic missions to foreign countries. One could say he just shot himself in the ass with his racist comments about Mexicans. But despite being fired from Univision & now NBC, he will still be running for president. The world waits with bated breath to see what other idiocies lurk in the heart of the man.

(Photo of Trump & Trump-piñata; can you guess which is which?)