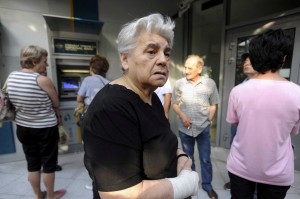 Pensioners have been lining up at ATM machines for withdrawals since pensions are paid at the end of the month. The government closed the banks for several days to avoid a run on the banks & compound the catastrophe–so seniors were unable to withdraw their pensions. As anyone on inadequate pensions knows, that means being unable to eat for several more days.

Standing resolute against the ruthless bloodsuckers is admirable but not the less unsettling & scary to go through–especially for pensioners & those with kids. Rent still has to be paid & food bought. Defying the terms of exploitation is the beginning of a historic process & the unraveling of the European Union. But for working people who live hand-to-mouth it’s hell to go through. Our fullest solidarity with our Greek brothers & sisters.

(Photo of anxious pensioners at ATM machine from Reuters)