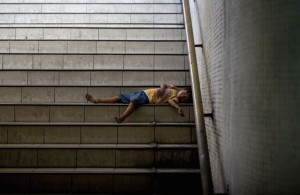 There’s a poem by William Butler Yeats that says:
“Come away, O human child!
To the waters & the wild
With a faery, hand in hand
For the world’s more full of weeping than you can understand.”

It’s a lovely poem but we can’t wait for faeries to address the problems presented for children under neoliberalism, the barbaric phase of capitalism. This tiny little child sleeping in an underpass in Manila could not be more vulnerable nor his needs more urgent.

The caption to the photo said “The Philippines’ roaring economy cooled in the first quarter of the year as the impacts of Super Typhoon Haiyan & other natural disasters hit harder than expected.” Who was the economy roaring for? Certainly not the tens of thousands of slum dwellers being burned & bulldozed out of their homes to make room for gentrification–nor for the 1.5 million homeless street children.

There are no rescue faeries coming. Human beings have to clean up this mess ourselves. We owe it to our beautiful children. May they not forgive us if we don’t measure up to the historic task.