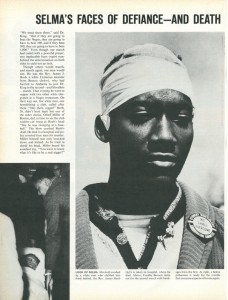 This man is one of thousands of unknown civil rights activists. Outside of this spread in the March 19th, 1965 issue of Life Magazine, little is known about him. The caption says his name is Freddie Bennett who turned up for the second Selma march on March 9th with bandages from being beaten in the first march on March 7th.

We should take a moment to honor him & the thousands of activists who were beaten & sometimes murdered but whose fearlessness & determination ended Jim Crow (US apartheid), changed the US profoundly, & inspired freedom movements around the world–in Northern Ireland, India, & African countries, & also the feminist movement.

Our deepest respect for their contribution to the cause of human freedom & social transformation.