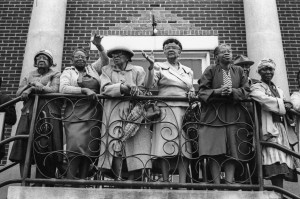 Today on International Women’s Day, we honor the legions of women who have always led social resistance against injustice & tyranny but are written out of the histories. Since this is the 50th anniversary of the historic civil rights marches from Selma to Montgomery, Alabama, we should recognize & honor the role of women in organizing the US Civil Rights Movement.

These are the church women of the Mt. Zion Methodist Episcopal Zion Church in Montgomery, Alabama who organized the Montgomery Bus Boycott in 1955 against the policy of segregation on public transportation. It began in December 1955 when Rosa Parks refused to cede her seat to a white person & ended in December 1956 when the Supreme Court ruled segregated buses unconstitutional.

Parks & these church women helped coordinate transportation for boycotters, spoke to meetings, handed out flyers, & used the phone in the days before social media to build what became the Civil Rights Movement. When Parks left Montgomery for Detroit because of continuing harassment, the church women celebrated her contribution.

What should also be acknowledged is that the political strength of these women inspired many activists to build the women’s movement. Feminism is often ignorantly chastised as a racist movement for excluding Black women. But Black civil rights activists sure as hell didn’t need remedial education by white women to join the struggle against female oppression, just as they had organized the struggle against white supremacy. One could say they wrote the book.

Our deepest respect to the women who played a central role in civil rights & receive so little of the accolades. We celebrate them today.