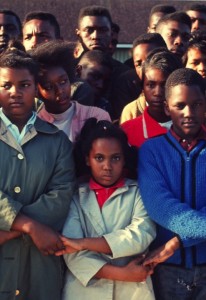 Children were an active & vital part of the US Civil Rights Movement but they were also often the target of racist hatred–particularly in the violent struggles around school desegregation.

Every new generation of Black children poses a problem for white supremacy since they must be socialized to accept inferior social status. Very often children accept that degradation least of all & rebel in many different ways.

This is 10-year-old Quintella Harrell (center) demonstrating with other students in front of the county courthouse in Selma, Alabama at the time of the historic Selma marches in 1965. Fifty years later, when interviewed, Dr. Quintella Harrell said, “We heard there was a possibility that things could get better, that we could go to better schools. We shared that vision.” In 1967 she became one of six Black 10th graders in the first integrated high school class in Selma.