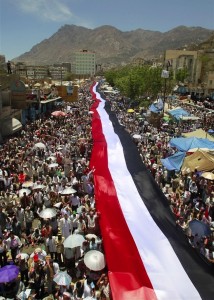 The justifications given for the barbaric bombing siege of Yemen, now gone on for nearly a year, include the threat of the Houthi insurgency & role of Iran. Somewhere along the line, they appear to have dropped the fear-mongering about Al-Qaeda which the US used for years to justify drone bombing in Yemen & restrictions on civil liberties in the US.

The massive destruction is an attempt to wipe out every trace of the Yemeni uprising in 2011 that was massive, determined, powerful, defiant, & often led by women in burqas. Even after it was thwarted by the intervention & maneuvers of other regimes in the region (most prominently Saudi Arabia), protests continued, including to demand the release of Yemeni citizens held in Guantanamo. Stealth graffiti was often the only form of protest.

The monarchical & military regimes involved in this barbarism against Yemen, including Saudi Arabia, Jordan, Egypt, Bahrain, Morocco, Kuwait, Qatar, Sudan, UAE, along with the US & UK, are terrified at the prospect of democracy in the Middle East because it is at odds with the best interests of tyranny in all its many forms.

The scope of the relentless savagery against the people of Yemen is to signal not just to people in the Middle East but around the world that resistance to tyranny will be crushed without mercy. Those of us not under the bombs have every obligation to stand with the people of Yemen by rebuilding the international antiwar movement. They led the way where we must follow.

Our deepest respect for the people of Yemen; our most heartfelt regrets the antiwar movement is too weak to stop the violence against you.

(Photo is protest in Sana’a on March 30, 2011 as part of Yemeni uprising, by Muhammed Muheisen/AP)