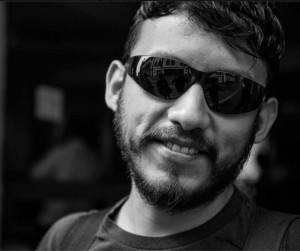 Today I received this letter from a Mexican friend I met while working together to build solidarity with the Ayotzinapa 43, the student teachers disappeared by the army in Mexico last September. It is a eulogy & tribute to Ruben Espinosa, a Mexican photojournalist, a friend of hers, & a fighter for justice under conditions of extreme repression & military occupation in Mexico. He was brutally murdered in Mexico because of his work. It’s an extraordinary & heartbreaking tribute which she is unable to post because of her family’s concerns for her own safety.

We should take a moment to honor this young man & the young women murdered with him–remembering they well knew the danger their activism placed them in & were undaunted. Our deepest respect & our condolences. May they Rest in Peace & Power. And may their lives inspire us to play our own parts in making this world free of violence & full of human joy.

“I woke up from a horrible dream, filled with chases, captive moments and myself filled with cow shit. I woke up jut to realize that this is the effect of the terrible news that I received before I fall asleep in tears. Ruben Espinosa, a colleague, a fighter for justice, a friend was found death tied like a pig, bound hand and feet, shot and tortured along with 5 other girls, girls who would dedicate their life to the arts and theater, just like me.

He left his hometown “Xalapa” as an auto-exile this past June, because it was not safe anymore for him; he was threatening, somebody did not like what he was writing. Since the election of the Governor Xavier Duarte in 2010, there has been thirteen journalists death, now fourteen counting him, making Veracruz most insecure state to develop as a journalist in México.

I must say that I am in shock right now. I remember having a conversation a couple of years ago with some friends back in Mexico, where we would say “We are not that important”, or “things like that only happen to people in the mafia”, but the more I think about it, the more I realize that Mexico is not safe anymore, specially for freedom of speech. My eyes hurt for crying. I promised my parents no to talk about the situation in Mexico on the social media, because they are afraid for me. Today the only thing I can say is… they should. This is why I write this letter in English and share it with you, far away from my country; because I need to release all this frustration and pain on my chest out of my system.

I fear for my friends who I follow everyday with their posts on the Internet, all this brave people, just like Ruben, who are brave enough to fight for justice. I fear for my colleagues who try to fight for justice and I fear for my family who leaves in Mexico and try very hard to be happy under the circumstances. As well I fear for myself for writing this letter, but above my fear there is hope; hope that there is a tiny possibility that everything could be better. Hope that they realize that the more they shout our voices; there will be more voices shouting out and multiply. Hope that the bad guys will realize how beautiful life is and how harm they do to the families and the friends of all the people that they took away from us.

I hope this people can sleep at night. I hope this people find peace in their harts to stop this horrifying situation. I hope we all as a humanity become more sensitive about the terrible crimes against freedom of being who we like to be. I hope one day I can go back home.”

Photo is of Ruben Espinosa; may he RIP.