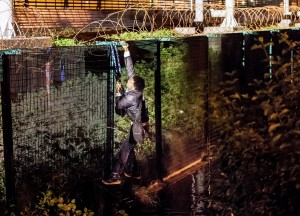 What price barbarism! From the point of view of refugees trying to get to England through the Eurotunnel, the truckers picked a hell of a time to go on strike. Lorries that refugees hitched on through the tunnel (albeit dangerously) aren’t moving & the strikers are burning tires at the entrances.

This has made it much harder for the immigrants since they’re being assaulted by French gendermes & they’ve had to erect makeshift housing. This hasn’t stopped them from trying to pass through the tunnel–on one night alone, 2,000 attempts were made to enter the terminal. Nine have died already this summer attempting to cross the Channel.

Here a man is trying to get over a razor wire fence around the terminal near Calais. One has to stand in awe of their tenacity & determination. The brutality used to deter them only merits contempt.

We wish them godspeed on their journey. Immigration is a human right. Open the borders.