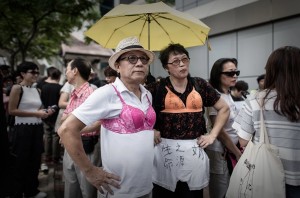 In a decision sure to make Hong Kong jurisprudence the laughing stock of the world, a magistrate sentenced a woman to three-&-a-half months jail time for assaulting a police officer with her breasts at a recent protest. The whole thing is worthy of a Monty Python skit.

Thirty-year-old Ng Lai-ying, who works as a clerk at a shipping company, was protesting Chinese traders from the mainland whose practices are driving up shop rents & prices in Hong Kong. In a chaotic protest that apparently involved jostling & close quarters, chief inspector Chan Ka-po accused her of using her chest to bump his arm while he was trying to grab the strap of her handbag. She testified that his hand landed on her breast & that out of fear she yelled “indecent assault”–which made other protesters throw things at him. There is footage showing several police officers ganging up on her to arrest her when she fell to the ground & fractured her nose.

Magistrate Michael Chan (whose brain must be rotting under that horse hair wig they wear) said “If I do not hand down a deterring sentence, the public might mistakenly think it is a trivial matter to assault police officers during protests.” He accused Ng of using “her female identity to trump up the allegation that the officer had molested her,” calling that a malicious act that damaged the chief inspector’s reputation. Not as much as this court ruling will.

Ng has three co-defendants, including her boyfriend & a 14-year-old boy. All three were also sentenced to jail time for the same offense but their role in this nefarious deed is not spelled out–so as not to evoke hilarity rather than outrage over this “malicious act” against the state.

Protesters gathered outside police headquarters last Thursday, the day of the trial. Many, including men, came wearing or holding up bras; banners read “Breasts are no weapons–give back our breast freedom”; a petition letter was turned in to the police demanding they review their guidelines to handle female protesters; & a topless male activist wearing a black bra told the crowd “We better watch out as one day police might accuse us of attacking with our penis or buttocks.” James Hon, a 66-year-old retired teacher told a reporter “It’s the first time to wear a bra in my entire life. We have come to this rather odd method to tell the world how ridiculous it is.” The charges were also met with scorn online with parodies & cartoons on Instagram.

Activists from a women’s coalition thought the charges against Ng might not be as innocent or ludicrous as they appear but might be used to set a precedent exploiting women’s rights to take part in protests. When we consider the lengths, including assault & rape, the Mubarak & Morsi regimes went to in Egypt to prevent women from entering Tahrir Square for protests, the feminist activists may very well have cause for concern.

Ng was released on bail pending an appeal but according to reports appeared to be quite shell-shocked as she exited the court. When we get over laughing we should think of ways we can strengthen her case in the appeal.