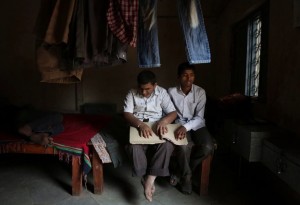 Yesterday marked the 207th birth anniversary of Louis Braille, the French inventor of the system now used by the blind in almost every language. Braille was blinded in both eyes at the age of three by playing with a tool in his father’s workshop. His parents went on to raise him without patronizing his disability or treating him as insufficient.

He attended one of the first schools for the blind & found the reading system then taught to be cumbersome. He was a creative, inventive person & at the age of 15 adapted a military code system into the braille reading system using an awl to create a raised dot pattern. An awl is the very tool which blinded him. Braille went on to teach history, geography, & algebra at the school but his reading system was not accepted in his lifetime. His lifetime however was brief & he died from respiratory illness at the age of 43.

Until disability rights erupted in the 1970s, blind people were massively patronized & instructed in helplessness even at schools for the blind. Obsequious & dependent were considered virtues. Braille was ahead of his times in rejecting all that which came primarily from sighted people inept in understanding disability. He said “Access to communication in the widest sense is access to knowledge, and that is vitally important for us if we [the blind] are not to go on being despised or patronized by condescending sighted people. We do not need pity, nor do we need to be reminded we are vulnerable. We must be treated as equals & communication is the way this can be brought about.”

We should tip our hats to Louis Braille who not only developed a communication system between the blind & sighted & opened the world to those with visual impairment but has made the sighted see the folly of prejudice & of patronizing those with disability.

These blind students at a government-run hostel for those with disability in Hyderabad, India are studying a book in braille.