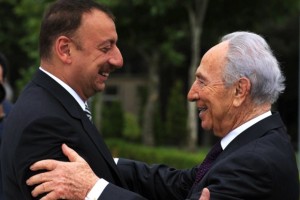 In May 2015, the Zionist magazine The Forward published an article entitled “Why Israel’s Alliance With Azerbaijan Is So Shortsighted” by Christopher Atamian. Atamian is an American writer whose grandparents were survivors of the 1915 Armenian genocide. He supports Israel because of what he considers the special affinity of holocaust between Armenians & Jews.

The article discusses Israel’s refusal to take up the whole issue of the 1915 Armenian genocide because after the collapse of the USSR, Azerbaijan conducted an ethnic cleansing campaign against Armenians (in 1991) & will not allow ethnic Armenians to secede & become part of Armenia. In that context he takes up the issue of Israeli military trade with Azerbaijan, including the sale of billions in arms, advanced drones, anti-missile launchers–much of which will be used against Armenians. Israel actually operates a military drone factory in Azerbaijan

Azerbaijan is run by a hereditary tyrant named Ilham Aliyev who has been in office since 2003 & took over the post from his father Heydar, a KGB operative & the bossman of Soviet Azerbaijan. It’s an extremely corrupt, repressive & brutal regime with notorious violations of human rights.

Since the days of Heydar the Horrible, Azerbaijan has been discreet about its relationship with Israel. In 2009, Ilham Aliyev compared relations with Israel to an iceberg: “nine-tenths submerged.” This is certainly not from reluctance over ethnic cleansing of Palestinians–where the real affinity of the two regimes lies–but to minimize international scrutiny. The economic & political relationship has become wide open since the younger Aliyev took over: he & Shimon Peres frequently pose for photos together. Azerbaijan now supplies 40 percent of Israel’s oil & Israeli weapons account for 43 percent of Azerbaijan’s military budget. Their bilateral trade is estimated at $4 billion a year.

Azerbaijan is an extremely oil-rich country & after the collapse of the USSR, US oil companies swooped down on the regime like vultures. But Azerbaijan’s real political importance is its location with Russia to the north & Iran to the south. In 2012, Iran claimed the Baku regime was collaborating with Mossad to assassinate Iranian nuclear scientists & allowing the spy agency to operate from its soil. The location makes it important not just to Israel but to the US which used its air bases & deployed troops from there in the Iraq War.

For some reason, an Israeli guy named Arye Gut (whose ancestors are Soviet Jews & who promotes himself as an expert on the former Soviet Union) waited several months to reply to the Atamian article. In December, Gut’s article made the rounds of a few far right-wing Zionist publications like Algemeiner, The Times of Israel, & JNS. It was a shameful embarrassing piece of denial turning Azerbaijani ethnic cleansing of Armenians into the opposite: Armenian genocide against Azeri people. Historically, he claimed Azerbaijan was a bastion of harmony & equality for Jews. Baku was a center of the Zionist movement in the 19th century but under Soviet rule, Jews were persecuted just as they were elsewhere in the USSR. What kind of a guy rewrites the history of Jewish persecution to suit the expediences of Israeli foreign policy? That question can only be answered with epithets.

In 2012, the corrupt FIFA organization sponsored soccer games in Baku & in 2015 European Olympic games were held there. It’s the European Union’s way of rendering tyranny respectable. Many performers were invited to entertain at these two events, including Lady Gaga, Jennifer Lopez, Rihanna, & Shakira. Amnesty International made a special appeal to several of them not to perform because of the violent & repressive character of the regime. None of them refused. It is of special interest that Lopez frequently performs for dictators & the others have all refused to honor BDS & have performed in Israel. They must have a special affinity with apartheid & ethnic cleansing.