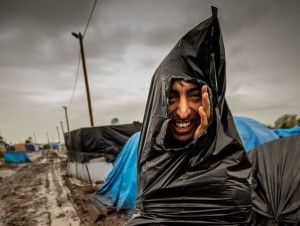 The Breitbart article (with subheadings like “Volcano-like ulcers”) is about an infectious disease called Leishmaniasis caused by parasites & spread by sandflies. For over a year, health agencies, epidemiologists, & infectious disease specialists have been reporting an outbreak of Leishmaniasis starting in 2012 in Lebanon among Syrian refugees in the border region. The reports of medical personnel said the outbreak was treated with medications & contained.

The rightwing twitter world became abuzz with reports that ISIS was causing the “flesh-eating disease” to spread in Syria hoping it would wend its way with refugees to Europe & take out the population like the Black Plague. This likely came from the head of the Kurdish Red Crescent who in February 2015 claimed the leading factor behind the spread of the disease was ISIS dumping the corpses of their victims in the streets. But the sandflies which spread the disease don’t eat rotting bodies; they suck blood from living people.

Far more likely than ISIS intentionally spreading the disease–which would take out their own forces–is the complete destruction of the Syrian healthcare system as a result of Assad’s bombing. Recently, there are also reports of Russian bombers directly targeting hospitals & ambulances.

Health agencies (including the UN, World Health Organization, & the US Center for Disease Control) & epidemiologists report that Leishmaniasis is endemic to 16 of the 23 countries in the eastern Mediterranean region, including Afghanistan, Iraq, & Syria & is always a major health concern. They also pointed out that over four million Syrian refugees in neighboring countries are living in overcrowded makeshift settlements without sanitation, access to clean water, & thus increased exposure & vulnerability to disease.

The pathology of the disease, which varies by climate from Syria to India to Brazil to West Africa, is scary as hell. There are 20 different species of it. Some cause skin ulcers, some fatally attack visceral organs like liver & spleen, & children are the most frequent victims.

According to a WHO factsheet, the primary risk factors for Leishmaniasis are poverty, malnutrition, lack of health care, deforestation, urbanization. About 12 million people in 98 countries are currently infected with about 2 million new cases & up to 50,000 deaths every year. Because epidemics are among the world’s poorest people, pharmaceutical companies are not motivated to develop new drugs or vaccines & it is considered a neglected tropical disease. In other words, it’s a neoliberal pathology–caused by barbaric economic policies that destroy people’s livelihoods along with their healthcare systems.

Any reputable news service would do a little homework on Leishmaniasis before they started sending out red alerts. Breitbart isn’t that. But we will take advantage of their irresponsible, racist scare-mongering–what has been called “epidemiological xenophobia”–to learn about this disease & the pathology of neoliberalism, the barbaric phase of capitalism.

Photo is a refugee in the Calais camp where thousands unable to move forward to the UK live in squalor without sanitation, access to clean water, or healthcare. Conditions are the same in Jordan, Lebanon, Greece, & elsewhere. To prevent the spread of infectious disease, the answer is simply open the damn borders & provide refugees healthcare & shelter.