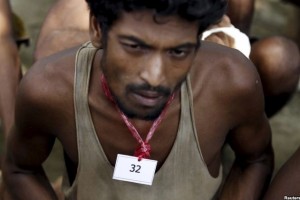 Does this picture remind anyone else of Auschwitz? The young man is a refugee off one of the boats “rescued” by the Myanmar navy–likely one of the last navies in the world you would want rescuing you. He’s being “processed” by immigration authorities. A total of 208 refugees & 11 crew members came off the boat last week. All but eight of them declared they were Bangladeshi & are being held at a prison camp a few kilometers from Bangladesh. Myanmar said Bangladesh has agreed to take 200 back & authorities are processing them for deportation. There’s no report about what happens to the crew members.

The eight Rohingya “rescued” are being held for “investigation” & authorities will not permit media to visit them. Those are the ones we have to worry about. They put a spotlight on Myanmar’s ethnic cleansing. They exposed that phony-assed Nobel Peace Prize winner as a pietistic baloney artist. They’re threatening all those business deals the military junta struck (let’s not be coy about who runs Myanmar) with multinationals.

Like the Palestinians & like the Kashmiris, the Rohingya have stood alone long enough. It’s time to start beating the drums heard round the world calling men & women of good will to stand with justice against a barbarous regime under the clarion call that “an injury to one is an injury to all.”

Our fullest solidarity with our Rohingya brothers & sisters.