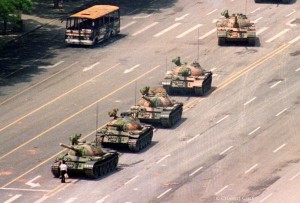 This of course is the iconic image of the unknown protester dubbed Tank Man taken June 5th, 1989. He was particularly courageous in stopping a line of tanks heading for Tiananmen Square, Beijing, because the day before on June 4th, 26 years ago today, the Chinese regime violently suppressed pro-democracy protests. The death toll from that assault remains disputed–some claim hundreds, others estimate thousands. It led to a regime crackdown on democracy which has not yet eased but only gotten worse.

Every year, including today, tens of thousands of democracy activists in Hong Kong commemorate the Tiananmen massacre. As we know from the protests & occupations last year, they have their own beefs with the Chinese regime over undemocratic elections & massive inequality.

Every year also commemorations of Tiananmen confront the falsification of history by those who deny a crackdown & massacre ever took place. Perhaps they’re too young to know it was followed live on international television for days. There were millions of witnesses; the documentation is beyond dispute & only the most cement-headed ideologue of Chinese communism would be so foolish as to try.

Reclaiming the history of Tiananmen Square is part of advancing the struggle for democracy in China. Chinese students studying abroad are circulating a letter, now with 100 signatures, detailing the violence which is not taught in Chinese schools. A Chinese newspaper denounced the students as influenced by “some overseas hostile forces.” Of course it wouldn’t be believable & denunciations obviated if it didn’t resonate completely with the lack of democratic rights in China today.

There are reportedly thousands of protests in China including labor disputes since it’s become a sweatshop haven & neoliberal austerity is fully operative–& environmental disputes, since the rivers are overcome with green slime & toxic effluents from factories. When the massive battalions of Chinese working people re-enter the historic battle against tyranny, neoliberalism, the barbaric phase of capitalism, is confronting a force much more powerful than a phalanx of tanks. In the parlance of the street, tyranny can kiss its ass goodbye.

Our solidarity with the tens of thousands who gathered in Hong Kong today to commemorate the democracy movement of 1989. We stand with you.