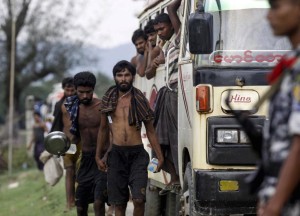 The 727 immigrants “rescued” by the Myanmar navy in a leaking boat on Friday have disembarked after being kept on the ship for four days. They disembarked in Rakhine state, Myanmar–the very place they were fleeing from. This ship is thought to be mainly Rohingya refugees though hundreds of Bangladeshi refugees have been “rescued” on other boats & detained in Rakhine. They are apparently trying to get the hell out of there & be deported back to Bangladesh fast because the situation is Rakhine is not only surreal but treacherous.

The Myanmar government said authorities are moving the immigrants to a “safe” location where their identities can be determined. One report says some may face prosecution for illegal immigration–meaning they embarrassed & exposed the Myanmar regime before the world as monstrous ethnic cleansers & they will be punished for that. Others will surely be incarcerated & tortured. If they survive they will end up back in the concentration camps the regime runs for Rohingya.

It’s impossible to imagine what these young men & others must be feeling as they’re moved around like livestock–unwilling to stay, unable to flee, in fear for their lives & those of their beloved.

Now that we know what’s going on, we cannot turn away. We need to begin elaborating a committed, coordinated, international campaign of political education, solidarity, & political pressure, including demanding sanctions on the Myanmar regime.

Our fullest solidarity with the Rohingya. Your grief & your outrage at oppression is ours.