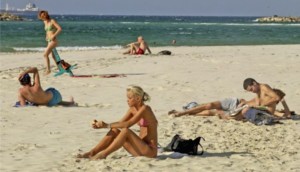 After three weeks of bombardment by Hamas rockets–for which there is still not a shred of evidence–traumatized Israelis head out to malls, restaurants, beaches to assess the damage. Those sitting on the hills of Sderot to get a front row seat to ethnic cleansing took time to change their clothes & thank the gods of Zionism for being on their side.

Meanwhile, Palestinians combed through tonnage of cement rubble to recover the bodies of beloved buried when Israel took out the whole neighborhood with bombs. They had only twelve hours before Israel started bombing again, goaded on by the psychos of Zion urging Netan-psycho-yahu to take all of Gaza out.

The vile piece of journalistic crap called The Jerusalem Post had a headline: “Into the fray: Why Gaza must go” where they chided leaders of Israel for “moralistic masochism” & temerity in the conduct of ethnic cleansing in Gaza. But world leaders express fear that this time Israel has gone too far. It isn’t slaughter that gives them pause (any more than it does in Afghanistan or Iraq) but the hundreds of thousands of people around the world from small towns to major cities who now know the truth & who continue to protest demanding “Stop the massacre in Gaza!”

Zionism is signing it’s own death warrant. The voices of Palestinian resistance are finally being heard: Free free Palestine! From the river to the sea Palestine will be free!