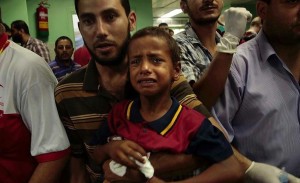 The children of Gaza are bringing Israel down. It isn’t that Israel went too far this time in bombing homes & schools & targeting children; that’s always been it’s policy. Zionist military strategists call it “mowing the lawn”–which explains the constant bombing over Gaza punctuated by several-day murderous sieges–all part of Operation Ethnic Cleansing. But this time Israel got caught for all the world to see. They can pay punks & professional psychos to fill the internet with hasbara lies & they have mainstream media covering their asses–since the role of media has always been to peddle propaganda to support war. But they can’t control social media or stop the gruesome images of death & sorrow in Gaza from going round the world.

Last week, Israel bombed a school in Beit Hanoun which the UN was using to shelter Palestinians bombed out of their homes. Israel did not deny the attack but only repeated that Hamas used schools for storing & launching rockets. While leaders of Israel are high on the smell of jet fuel & genocide & blinded by political support from the US & Europe, Zionist media of the most right-wing & even crackpot sort must have understood the tsunami of revulsion that bombing small children would evoke. They understood they would need to counter videos & photos from horrified reporters showing small children with massive shrapnel injuries from DIME weapons & flechette shells used by Israel.

It says everything you need to know about Netan-psycho-yahu & Israeli leaders that crackpot Zionists knew enough to lie & appear the voice of reason by claiming Israel did not bomb the school. Rather, they reported, a misfired Hamas rocket hit the school & maybe an errant Israeli shell from ground fighting in the area. But how does that explain the shrapnel wounds? There’s no need for contention here; any forensic investigation of the school & shrapnel injuries that killed 16 Palestinians & critically injured others would quickly show the source of those weapons. And they would have Israel & “Made in the USA” all over them.

But The Washington Post, indistinguishable now from the public relations department of the Israeli military, reports Israel denies bombing the school & “released a grainy, 26-second aerial video” proving it. Well that’s about as convincing as those evil fairies flying in from outer space that play such a role in media reports of ethnic cleansing in Gaza.

Media tries to hedge truth in hundreds of photos of utter devastation in Gaza by captioning ‘medics, or police, or witnesses in Gaza’ claimed the carnage was caused by Israeli airstrikes. Who the hell do they think they’re fooling!?

This distraught little boy is waiting in the emergency room at a hospital after being injured when Israel bombed the UN shelter. The death warrant of Zionism is signed by the tears of this small boy & the shrapnel that killed & injured so many others. Zionism can bend over & kiss its hasbara goodbye.