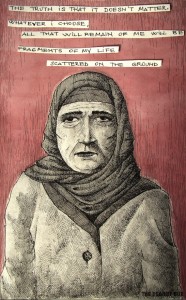 Liberal Zionists (those who want to believe a Jewish-only state has some relationship to democracy) & who support the murderous assault on Gaza keep wanting to change the subject to Syria & they chide us: ‘If you’re so concerned about justice, what about Syria? Why no opposition to Assad’s regime? Palestine is small potatoes.” So why does Palestine matter? Why have hundreds of thousands around the world risen up in thunderous defense of Gaza? Because for 66 years they stood alone & undaunted against two of the mightiest military arsenals in the world & never reconciled themselves to apartheid or expropriation. They are not just a symbol of defiance against tyranny. A victory for Palestine would cut the Gordian Knot of colonialism in the Middle East & release the energies of revolution against tyranny of every kind around the world. Long live Palestinian intifada! Take it international! Palestine will be free. (Political art from the Peanut box)