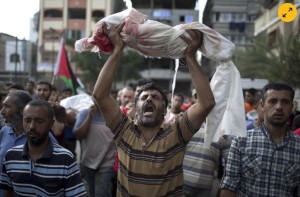 This photo is being considered for an annual photojournalist award by the Guardian UK. It’s a Palestinian man holding up the body of one-year-old Noha Mesleh at her funeral on July 25th. The child was killed when Israel bombed the UN school used as a refugee center In Beit Hanun.

There are many reports, including in mainstream media, about the horrific physical & psychological trauma sustained by the children of Gaza who were directly targeted by Israeli bombers. But of course the trauma of adults who watched their children suffer & die or suffer & live with severe shrapnel damage, amputation, & psychic devastation is also massive. You can see that in the faces here. Especially as Zionists malign them as using their children for human shields; especially as they try to keep their children safe now midst mountains of cement rubble & without a place to live.

This is the kind of image circulated millions of times on social media that began unraveling the Exodus myth & exposed Israeli apartheid & ethnic cleansing. Palestinian solidarity does not exploit human suffering but we do not turn away from it either. This is a time for reaching out to build the economic & cultural boycott of Israel; for holding fundraisers for humanitarian aid to Gaza; for holding forums, debates, teach-ins so those with questions can learn about the conflict & come to side actively with Palestinian justice. The political energy of winter is not hibernation but the expansive one of solidarity.