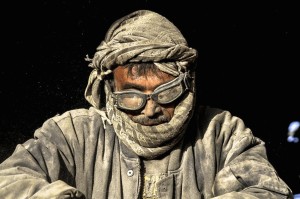 File this image under “The political uses of cognitive dissonance in war propaganda.” The media caption reads: “An Afghan laborer works at a plastic recycle factory in Herat, Afghanistan, December 8, 2014. Afghanistan’s economy has improved, with the help of international aid, after suffering decades of fighting.”

Deconstructing that caption will be a breeze. Plastics when recycled release toxic chemicals like benzene & dioxin & heavy metals like cadmium & lead. They’re released into the air, water, & ground where they enter the food supply. All that & all that international aid & they can’t come up with safety equipment for this young worker!?

As for that vaunted international aid, most of what was pledged by other countries was never delivered & what did get sent was ripped off by NGOS or used to bribe corrupt Afghan officials. You have to dig a little for that information but you can find it. It isn’t just reckless allegations. The international aid scam was exposed in Haiti, Afghanistan, & now Gaza. They keep up the charade only because it serves war mongering. Because as we can see, it does nothing to help workers, especially the thousands of children workers in Afghanistan. You can also file this image under “Emancipation-US style.”