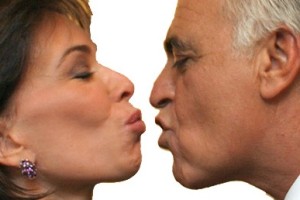 Fox News commentator Jeanine Pirro is making news for her comments after the killer cop was allowed to walk for murdering Eric Garner. With supreme arrogance & insolence (though still perfectly coifed), Pirro claimed on her TV show that the public needs retraining to show more sensitivity & obedience to cops. The killer cop now becomes the victim & Garner a belligerent disobedient boor who got what his insensitivity deserved.

Before we get all aghast at the racism & stupidity of Pirro we need take a gander at her personal & political history to see that her entire career is based on such swill. She’s a social climber from Westchester County north of NYC, married for nearly 40 years to Al Pirro (divorced last year), a hustler who got bagged & sent up the river for tax evasion on their personal wealth. He hasn’t been prosecuted for his mob connections or for buying her elective offices in Westchester because they partied at their mansion with all the highest officials in the state, including the governor. She hasn’t been prosecuted either for sharing in the income tax fraud. But then she has friends in high places.

Jeannie runs off at the mouth; Al prefers fisticuffs especially against restaurant staff & girl friends–people he considers his inferiors. He was prosecuted for disorderly conduct & unlawful restraint after getting arrested for roughing up his girl friend & not allowing her to leave a restaurant. Al made his fortune working as the legal muscle for real estate developers in Westchester. That’s where those mob connections came in handy. That’s where Jeannie got her sensitivity training.

Jeannie once made People magazine’s Most Beautiful People List. That may be one of the things keeping her mug shot off the walls of the post office. Her political connections don’t hurt either. Cause if there’s one thing Jeannie’s good at, it’s feathering her own nest, kissing ass to those she considers superior, & the most vile racism, including toward people of the same political genre like Barack Obama.

She once ran for US Senate as a Republican against Hillary Clinton & lost. But the only difference between them is the color of lipstick.

This is photo of Jeannie & Al practicing their pucker for the next ass they have to kiss.