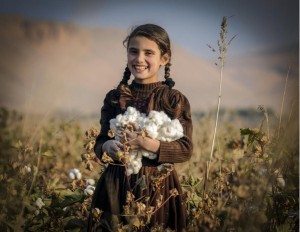 This little Afghan girl is harvesting cotton in the Balkh province, considered one of the most peaceful in the country. Of course, in a US-NATO occupied country, peaceful is a relative term signifying only that presently they’re not bombing it into smithereens & doesn’t include the barbaric conditions in the local coal mines. The tranquility here is only apparent.

Mazar-i-Sharif is the capital of the province & was the first city to fall to US forces in 2001. US Special Forces rounded up 8,000 Taliban fighters who had surrendered & massacred them. An Irish documentary titled “Afghan Massacre: The Convoy of Death” investigated those allegations & the filmmaker claims mass graves of thousands of victims were found by UN investigators. The Bush regime tried to block the investigation of what is an extremely gruesome war crime.

The Taliban were transported in closed trucks holding about 200-300 men each to a prison & denied water along the way. Witnesses claim when they cried out for air & water, soldiers fired holes into the trucks killing several prisoners. When they arrived at the prison, blood was leaking from the trucks & many were already dead. Some drivers were ordered into the desert where those prisoners not already dead were simply shot & dumped in mass graves. Witnesses also claim that those who arrived at the prison alive were tortured & murdered under US supervision. Such is the nature of emancipation US-style.

US-NATO out of Afghanistan! US out of Iraq!