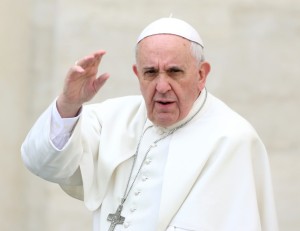 The one thing you can say for sure about Pope Francis is that he knows how to play both sides of the street. He’s been stringing gays along for a while now with equivocal comments about gay sexuality, same-sex marriage, & their place within the church. But equivocation is reaching its limits & the one thing that has become certain is that the pope will remain Catholic.

A few weeks ago he convened The Synod on the Family, a meeting of cardinals in Rome to reconsider the church’s traditional views on same-sex & divorced families. They concluded that God likes things just the way they are, in accordance with the prejudices of the College of Cardinals.

Now this week Pope Francis convened an ecumenical Vatican conference called Complementarity of Man & Woman. Well it’s ecumenical only in the religious sense with Evangelicals, Pentecostals, Mormons, Hindus, Muslims, & a pile of Catholic prelates. But that ecumenical thing really takes a beating when it comes to politics since most of those attending are about as right wing as they come. They’re the “traditional family values” crowd.

That complementarity thing has other limits, since of the 30 speakers asked to address relations between men & women, only six were women. One of them was a nun named Sr. M. Prudence Allen. Sr. Mary Prudence is an advocate of the New Feminism based on the teachings of Pope John Paul II who tried to root the complementarity stuff in his Theology of the Body–which looks to most like Sex Education 101: the physical make-up of the genders makes it appear they’re made for each other. How astute an observation! But from physiology John Paul II leapt to the social conclusion that women should reject male models of “domination”, value their roles as mothers & caretakers, & honor the “feminine genius” of empathy, emotive capacity, subjectivity, communication, intuition, interpersonal relations. And he thought he was being so original! When you translate that from Vatican Latin, it means the pope wants things too stay just like they were in 1952. Well you can take that empathy stuff as an excuse to deny women justice & shove it. John Paul is not the first to pull that stunt & he won’t be the last.

The big quote from Pope Francis coming out of the complementarity conference is that “children have the right to grow up in a family with a father & a mother.” Well that’s a problem in the real world. Because if neoliberal barbarism has done anything, it has smashed the foundations of stable social life, including family relations. War, immigration, unemployment devastate social life, separate families in the most wrenching ways. For example, it would have been good if Pope Francis had thought about the affects of Israeli ethnic cleansing on families in Gaza & it’s not too late for him to speak out.

Pope Francis has really taken up the mantle of New Feminism–which is the old family values schtick–& will be attending another conference on complementarity in the US next year. A lot of people hold out hope for the pope but he’s proving more & more that the new Vatican is very much like the old Vatican.