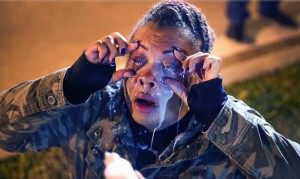 This is what democracy looks like in the Black community of Ferguson, Missouri, the heartland of the USA which has military operations in over seven countries to bring this kind of democracy to other people.

This is what media reports are calling a healing ritual where riot cops show up to stomp on the the democratic rights of the Black community, laid out in the US Bill of Rights, to protest their kids getting gunned down by cops. This protester was treated with the healing balm of mace for refusing to accept racist violence as her due.

After the murder of Michael Brown on October 10th, Attorney General Eric Holder marched into town in a dog & pony show of condolences & baloney. He promised a Justice Department investigation which could lead to prosecuting the killer cop on federal charges for violating Brown’s civil rights. Now what about prosecuting him for homicide? What about more than the naughty finger for shooting down an unarmed kid in cold blood?

Now the big guns in media–the NY Times & the Washington Post–are reporting that forensic evidence corroborates the alibi of Darren Wilson, the killer cop. They claim Brown’s blood is on the cop’s gun, uniform, & inside the patrol car. Since the agencies doing the forensics (the St. Louis cops, FBI, & Justice Department) are the very ones up to their eyeballs in the systemic denial of Black civil liberties & rights, the term “planted evidence” comes to mind. It’s reported this evidence will make it harder for the Justice Department to prosecute Wilson. Oh golly, what a surprise!

The Ferguson Black community must have seen that coming from a mile away: turning Brown into the criminal. Because they have not ceased with protest & demands for justice. They are leading one of the most momentous struggles in the US–the fight against racist tyranny built into the very fabric of society.

Every man & woman of good will must stand with them & champion their struggle because it’s potential is nothing less than ending the reign of terror against Black teens & leading to the social transformation of US society.