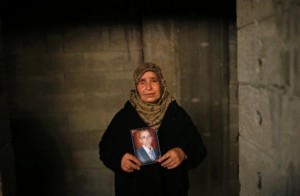 This is one of thousands of stories Palestinian solidarity activists need to tell far & wide to build the economic & cultural boycott of Israel (BDS). This is 50-year-old Najah Abed al-Dayem holding a picture of her husband who was killed during Israel’s barbaric seven-week Operation Ethnic Cleansing in Gaza. She lost her right eye & her son, Abed, lost both his legs in the infamous incident when Israel bombed the school being used as a UN refugee center in Beit Lahiya (in northern Gaza) claiming it was a Hamas rocket nest. Beit Lahiya is just miles from the hills of Sderot, Israel where makeshift parlors were set up for a front row seat to ethnic cleansing, complete with waving Israeli flags, in a scene that will always stand in ignominy & condemn Zionism.

The foregone conclusion is now openly acknowledged: the Cairo conference to raise funds for Gaza reconstruction was a charade. They raised $5.4 billion of funny money, the only kind ever available for humanitarian purposes. Anybody who follows these aid charades saw that coming a mile away with Haiti & Afghanistan only the most recent examples.

Meanwhile Palestinians live midst mountains of unstable cement rubble, without housing, sufficient medical facilities, power, sanitation. A very simple problem: where do you go the toilet? Where do you take a bath? Where do you cook a meal? This state of affairs can give rise to dozens of health crises, just as the lack of humanitarian aid to Haiti after the 2010 earthquake facilitated the cholera epidemic. And in fact the situation in Gaza is very comparable to Haiti where thousands still do not have housing & are being railroaded into Clinton-orchestrated sweatshops.

The big-talking politicians in Cairo throwing around the funny money won’t do a damn thing to help the people of Gaza. That is where the role of Palestinian solidarity is absolutely vital. Israeli Zionist mythology claiming Palestine as an inheritance from God has taken an enormous beating. Only the craziest Christian Zionists cling to that baloney; everybody else recognizes Israel is colonialism. The problem is some can live with that, some (& not only left Zionists) justify that as a fait accompli: “Oh well, Israel’s there to stay now; there’s nothing to be done. Palestinians will have to accept bombed out bantustates & constant colonial inroads by Zionist settlers from all over kingdom come. History always has its losers.” The hell with that stuff!

Palestinians have a claim to self-determination & justice & no one has the right to rationalize that away by bowing to the neoliberal realities of Israeli colonialism. Barbaric edifices fall all the time under the unbearable contradictions of tyranny–from the Roman Empire to the USSR. There is only one realistic & desirable outcome for Palestine & Israel & that is the dismantling of the Zionist state down to its last ugly manifestation & the building of a democratic secular state where Jews & Palestinians can live in peace.

Palestinians have human & democratic rights & no one can blow those off with a defeated shrug toward the fait accompli. The situation for Palestinians grows more perilous as the BDS movement continues to grow internationally. Our job as solidarity activists is immense but our commitment to Palestinian justice, to telling the truth, to evangelizing for BDS can help Palestinians change the world to make it suitable for Jews & Palestinians to live in harmony.