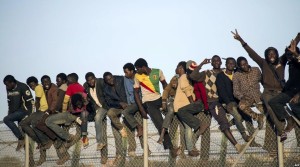 There are several photos of this scene with African immigrants attempting to scale a seven-metre (23 feet) triple-layer razor wire fence to enter the Spanish territory of Melilla bordering Morocco on the north coast of Africa. They come from several sub-Saharan countries in order to enter the European Union (EU) for work. If they can make it into Melilla, those who aren’t deported stand a chance of moving north.

We know the perils of Central American immigrants crossing Mexico to the US border: hopping on & off dangerous, high-speed freight trains, attacks by military; paramilitary, & criminal gangs; robbery, rape, kidnapping, torture, dismemberment, disappearances into mass graves, murder. There is however insufficient reporting on how African immigrants cross to northern Africa, but women, children, & elderly people are also making the journey in hopes of making a better life than neoliberal predation allows in their own countries.

Thousands of these immigrants go to the forested area bordering Melilla in hopes of crossing the fence; photos show they are mostly young men. Thousands of other immigrants try to sail across the 15 kilometre (nine mile) strait from Morocco to Spain in makeshift boats & dinghies. Thousands drown in the attempt. Those who scale the fence camp on the Moroccan side waiting for an opportunity to charge the fence & enter Spanish territory. Their camps are frequently assaulted by Moroccan cops or they are rounded up & bussed several miles to the central Moroccan city of Fez.

When they attempt to cross, they are assaulted from the rear by Moroccan riot cops (are there any other kind of cops today?), who represent the southern flank of EU immigration policy, & they are beaten back by Spanish riot cops. Police violence against immigrants is unbridled. One incident recently caught on video by an immigrant rights group shows Spanish cops beating an immigrant from Cameroon as he hung from the fence & then carrying his unconscious body back to the Moroccan side.

The immigrant rights group which published the video say they spoke to the 23-year old Cameroonian man who said he was urinating blood & could not lie on his side but he had been given painkillers–though it could not be determined if he was treated in a hospital or remained in an immigrant encampment. What kind of barbarism is that!?

The UN–always Johnny-on-the-spot when it comes to injustice–did their customary hand-wringing when they were shown the video of the beating. “This worries us,” said the spokeswoman in Spain for the UN High Commission for Refugees. She blithered on: “Whatever their reasons for trying to enter, these people must be respected & these images show that some parties are not acting as they should.” Beating a man to a pulp is “not acting as they should”? What the hell do they call murder? What do they call it when thousands of men, women, & children immigrants drown in the Mediterranean Sea? Another impropriety?

Open the damn borders! Immigration is a human right!

Rather than post the photos of Moroccan & Spanish cops assaulting the young men, we post this photo to show the spirit of the immigrants who have just been through hell & stand defiant.