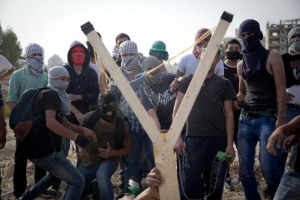 Judging from the character of its propaganda defending the violent onslaught against unarmed Palestinians, Israel must be in a time warp. The hysterical tone used in media to justify the 1967 War against Palestinians doesn’t cut it in the era of BDS & Palestinian solidarity–especially after the genocidal carpet bombing siege of Gaza in 2014. According to several human rights groups, that siege directly targeted civilians & children by bombing hospitals, schools, refugee centers, ambulances, markets, residential neighborhoods–& blasted that “Exodus” mythology all to hell, exactly where it belongs.

But you can’t fault a Zionist hack for trying. Bret Stephens, a columnist & editor for the Wall Street Journal (where no one goes for the progressive view of things) & former editor-in-chief of the Jerusalem Post (a right-wing Israeli tabloid), wrote a column yesterday titled “Palestine: The Psychotic Stage–The truth about why Palestinians have been seized by their present blood lust.”

Our man is simply off his rocker. He argues that media is favoring Palestinians in the present pogrom. You gotta ask why this bozo is looking a gift horse in the mouth because there is hardly an article in mainstream media (of which he is a leading part) which does not misrepresent Palestinians as violent & on a stabbing binge against Israelis. Political poor mouthing is a staple of Zionist psychology where they also frequently lament how the US government has turned against them. To the tune of over USD$3 billion of grants annually? Such ingratitude for such largesse.

He added farce to his jeremiad on journalist bias by claiming a Palestinian used a vegetable peeler to stab an Israeli. One hopes it has more lethal capacity than American peelers which barely cut through potato skins. But farcical elements aside, the article is a piece of racist hysteria which refers to Palestinian’s “blood fetish,” “blood lust,” & “communal psychosis in which plunging knives into the necks of Jewish women, children, soldiers & civilians is seen as a religious & patriotic duty, a moral fulfillment.” This crap may fly with hedge fund managers, Wall Street bankers, & Zionist guppies but quite honestly it sounds like Nazi propaganda against Jews, Roma, & Bolsheviks.

This photo really shows the level of Palestinian blood fetish & communal psychosis Israel has to contend with. They’re using a handmade giant slingshot to hurl a stone at Israeli troops in Ramallah, West Bank yesterday. Those troops with tanks, pepper & tear gas, stun grenades, live ammo must really be terrified confronting all that blood lust. But what else could explain going up against one of the most sophisticated military machines in the world with slingshots? Truth of the matter is, if Palestinians used bazookas against Israeli troops, they’d be more than justified in defending themselves against unspeakable & relentless Israeli violence & dispossession.

Media often makes note of the masks Palestinian protesters wear, as if the keffiyeh represented nefarious intent rather than protection against tear gas & against being identified & marked for execution or arrest. Or is it to hide their blood lust?

What’s not one whit amusing about Stephen’s rancid vituperation is that it’s used to justify monstrous crimes against unarmed Palestinians, young & old, who have come of age & grown old having to fight for their existence against a barrage of racist slanders & Israeli predations for now 67 years. They are on the front lines & cannot respond to all this rubbish. But we can & we should by calling emergency rallies that confirm for those who are uninformed but have deep misgivings about the news they see justifying Israel’s latest pogrom, which is a period of heightened aggression against Palestinians.

Build the hell out of the economic, cultural, & academic boycott of Israel & demand no aid to Israel.