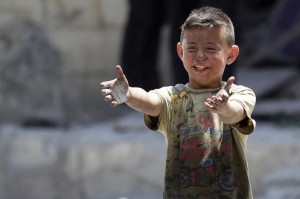 This grieving boy lost his brother in the massive bombing of Idlib province in Syria. He’d probably feel a whole lot better about it if he knew it was Assad’s or Russian bombers defending the homeland rather than US bombers trying to take out Assad. But he’s just not up on the raging debates among leftists who refuse to organize antiwar protests because they’re hoping Russia will save Assad.

With every new such blunder, the left makes itself irrelevant to social change. While Idlib & Aleppo burn.

Rebuild the international antiwar movement to demand “End the bombing in Syria & Iraq!”