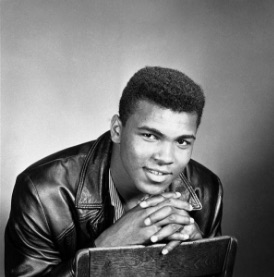 We should take a moment to honor Muhammad Ali who died yesterday at the age of 74. In later years he grew conservative & let himself be honored by presidents Bush, Clinton, & Obama but in his youth he would have spit in their eyes for their monstrous wars & for violence against the Black community.

He was a civil rights fighter who threw his 1960 Olympic medal into a river after being denied service at a soda fountain counter. Inspired by Malcolm X, he converted to Islam in 1963 at the age of 22, renounced Cassius Clay as his “slave name” & renamed himself Muhammad Ali. In 1967, he was drafted into the US Army but refused to serve. As a result, he was stripped of his championship title, convicted of draft evasion, & sentenced to five years in prison. Released on appeal, he was unable to fight or leave the country but traveled the country speaking against the war & for civil rights.

“Why should they ask me to put on a uniform & go 10,000 miles from home & drop bombs & bullets on Brown people in Vietnam while so-called Negro people in Louisville are treated like dogs & denied simple human rights? No I’m not going 10,000 miles from home to help murder & burn another poor nation simply to continue the domination of white slave masters of the darker people the world over.

This is the day when such evils must come to an end. I have been warned that to take such a stand would cost me millions of dollars. But I have said it once & I will say it again. The real enemy of my people is here. I will not disgrace my religion, my people or myself by becoming a tool to enslave those who are fighting for their own justice, freedom & equality.… If I thought the war was going to bring freedom & equality to 22 million of my people they wouldn’t have to draft me, I’d join tomorrow. I have nothing to lose by standing up for my beliefs. So I’ll go to jail, so what? We’ve been in jail for 400 years.”

“In your struggle for freedom, justice & equality I am with you. I came to Louisville because I could not remain silent while my own people, many I grew up with, many I went to school with, many my blood relatives, were being beaten, stomped & kicked in the streets simply because they want freedom, & justice & equality in housing.”

(Photo is Ali in 1970 by Charles Kolenovsky/AP)