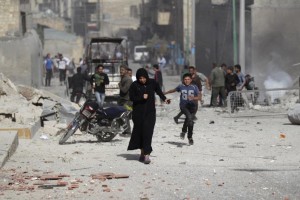 Somebody has been bombing Idlib province, Syria to smithereens. Media reports that the massive bombing, including of medical facilities, is “apparently” by forces loyal to Assad but “It was unclear whether the attack was conducted by Russian or Syrian fighter jets.”

According to the Russian Defense Ministry (quoted in RT, the Russian news outlet), it isn’t Russian bombers. They claimed “No combat missions, let alone airstrikes, have been performed by the Russian Air Force in Idlib province.”

The US State Department said “We’re still looking into what happened in Idlib. We don’t have a great sense or complete knowledge of who’s responsible. We’re going to continue to work closely…with the Russians to try to figure out what happened….Obviously, the images coming out of Idlib are very troubling.”

Well isn’t that interesting!? All those images coming out of Idlib from fleets of surveillance drones & the US can’t identify whose air force has been bombing the hell out of the place for days!? And what’s this new collaboration between the US & Russia? Isn’t the official story that they’re on opposing sides? Russia is there to protect Assad & the US is there to take him out?

Somebody is bombing Syria & every government involved knows who. Whether it’s the Assad, Russian, or US air force (or more likely all three of them), or even evil fairies from outer space, the response is not to quibble over which air force is guilty but to demand the end of bombing in Syria & the withdrawal of all military involvement.

The left has put itself in a miserable position when it posits the Russian role as defending a democratically elected dictator. How can it explain the new alliance between the US & Russia?

Rebuild the international antiwar movement to demand “End the bombing of Syria!”