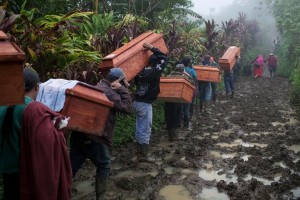 These people are carrying coffins with the remains of some of the 45,000 people “disappeared” during Guatemala’s 36-year civil war between 1960 & 1996. Successive right-wing governments led by former generals directly implicated in the disappearances & murders of 200,000 indigenous Mayans have rebuffed political pressure to exhume & identify those murdered & dumped in mass graves. Exhumations have been going on since 1996 but as of two years ago, less than 1,000 skeletons had been recovered.

All were killed by soldiers & allied paramilitaries trying to wipe out a guerrilla movement using scorched earth military tactics that swept up everyone in its path–not just students, trade union & political activists, but women out shopping for food, children walking to school, people working in fields. According to forensic anthropologists leading the exhumations, victims were often buried with blindfolds, with hands & feet bound, had broken bones, & were often naked. Interrogation at military bases included rape, torture, extrajudicial execution, & secret burial often right near the bases. Many were hurled from helicopters into the sea or volcanic craters.

Because successive presidents of Guatemala have been the generals directly involved in executing the scorched earth civil war, there has been no justice. Former president Efrain Rios Montt was prosecuted in 2013 & has essentially walked on the charges. President Otto Pérez Molina just resigned & was arrested not for his role in genocide but for customs fraud & bribery.

The exhumation process is a gruesome one because the skeletons of most are piled in mass graves & are not identifiable so DNA testing must be done for grieving family members to properly bury & honor their beloved. Most of the clandestine cemeteries are on still active military bases–some which fly the UN flag & where in fact Guatemalan military & police officials stationed there wear the distinctive blue helmet of the UN. Many of the bases of course–then & now–are operated by US military officials & bankrolled by the Pentagon.

Family members continue to demand justice. There’s a political accounting to be made here & exposing the political use of mass disappearance is part of the process of bringing all the guilty parties to justice & of course of exposing & prosecuting all who were involved–including within the UN & Pentagon. There is no impunity for mass murder. As the family members & human rights activists in Guatemala chant, “No Amnesty, No Pardon.”