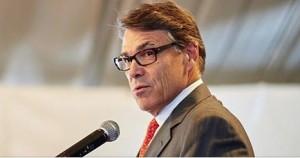 The first Republican candidate for president has pulled out of the race after his poll numbers dropped to one percent from a high of two percent. Even the cattle farmers he served so well as governor of Texas wanted no part of Rick Perry in the White House. The cattle market still hasn’t recovered. Neither has the English language down here.

He made his announcement in the livestock barn at the Iowa State Fair since heifers & mules are the only crowd he’s been able to gather for quite a while now. They’re in pens & can’t get away. “I share this news with no regrets,” he said. The livestock snorted their approval & were echoed in cattle barns across the state of Texas.

Good riddance, Rick. One down, 15 more idiots to go.