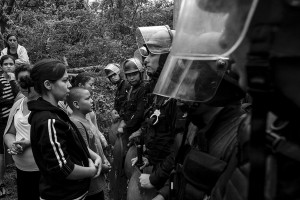 Over 500 years of colonialism in the Americas where no barbarism against indigenous peoples was too extreme & still the process is not complete. There isn’t a country from the North to South Pole where they are not still fighting for survival & against dispossession by mining & oil companies, & agribusiness conglomerates. And there isn’t a place where they aren’t leading the fight for environmental integrity against deforestation, destruction of rainforest, fracking, strip mining, & predations of all sorts. That’s true not just in the Americas but in both hemispheres.

The opposing phalanxes in this photo are Guatemalan riot police & soldiers facing down community activists from San Jose del Golfo, a hamlet 19-miles outside Guatemala City. The activists are blocking the road to prevent dump trucks, excavators, & other heavy machinery from being moved in for a mining operation. For three years the communities in the area, led by a group named La Puya, have prevented the construction of new gold mines by a US mining company. Ninety-five percent of the families in the region rely on farming for a living & know full well the arsenic & mercury efflux from gold mining would contaminate the water table & their fields, destroy their health, & turn the region into a toxic wasteland.

La Puya started with a Rosa Parks-type action in 2012. A woman from the area became concerned by caravans of heavy equipment moving in for the mining operation & parked her car sideways across the road to stop the convoys. When others joined her, a movement began & till today they continue to block & impede operations despite massive military force against them.

Mayan women, who have taken the brunt of violence for centuries & in the 36-year civil war between 1960-1996, are leading this struggle. As remarkable as they are, there is no purpose to romanticize the odds against them. They can only win this battle against neoliberal capitalist plunder with massive international solidarity & pressure on the Guatemalan regime to back off the military & riot police & lock the country down against multinational marauders.

Our deepest respect & fullest solidarity with these activists. The US environmental movement has largely been coopted by corporations; to play our necessary part in supporting indigenous peoples around the world & in defending the environment, we need to do some Rosa Park-type actions of our own & throw the corporations out of the movement they are trying to destroy.