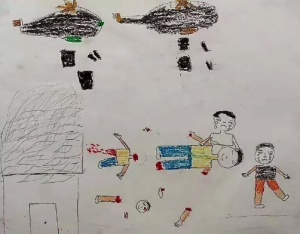 This picture was drawn by a 2nd grade Syrian child. The dead children are smiling whilst the surviving children are crying.
Whose bombers those are is a matter of dispute for those who support the Assad dictatorship & want us to believe they are piloted by evil fairies from outer space rather than Syrian & Russian pilots. Or are they US & Israeli bombers since they are both now allied with Russia in supporting Assad?

So while Assadists & some anti-Assadists debate about whose bombers are the most desirable way for Syrians to die & make an absolute disaster of political analyses, the children speak with plaintive voices not heard over the cacophony of political confusions, compromises, & corruption.

The situation may be complex but that is compounded by activists from the libertarian & Stalinist political traditions who support the regime of Assad, including making pilgrimages to visit him. This would not be their first betrayal of democracy.

When there is such massive confusion about which side to support, solidarity must begin by demanding no military intervention into Syria. Assad has several military allies precisely because he cannot destroy the popular revolution against him on his own.