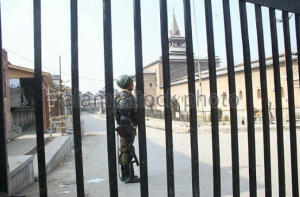 Modi certainly didn’t need any lessons in criminality & occupation from Netanyahu since he was so practiced in pogroms against Muslims. But he may be taking some cues from Israel by locking down the mosques in Srinagar for Friday prayers for the 6th consecutive week of the siege. Just as Israel does with Al Aqsa Mosque, including allowing Israeli rightwing provocateurs to tour the mosque compound whilst Palestinian men & boys are locked out.

Whoever could conceive that in the 21st century freedom of religion would become a central political issue for millions of people, mostly Muslims, around the world?

This is Jama Masjid (mosque) in Srinagar locked down & guarded by Indian troops.