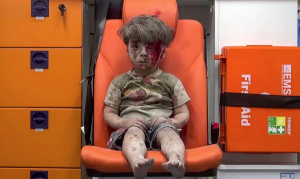 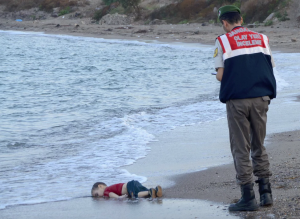 Reluctantly I am posting these photos of Syrian children–on the top 5-year-old Omran Daqneesh who was lifted from the rubble of a building damaged in an airstrike on Aleppo & on the bottom 3-year-old Alan Kurdi who drowned off Greece in September 2015.

They have become symbols of Assad’s war against his own people & of the massive refugee crisis that war has created. It is estimated that at least 400,000 Syrians have already died & millions have fled as refugees with countries refusing asylum & whipping up Islamophobic hysteria against them. To date, the US has accepted only about 2,600 Syrian refugees & European Union countries are deporting them back to Turkey, another bastion of tyranny.

There is a massive historic failure here & one for which Syrians are paying an unbearable price. The vituperative exchanges need to end & educational debates begin. The political agenda of the libertarians & Stalinists who support Assad must be exposed. The pursuit of solutions in militarism must be opposed in the most unconditional terms. Educational forums & protests must be organized to oppose military intervention for or against Assad, to demand the right of refugees to asylum & to denounce the news blackout about their fate. Fullest solidarity must be extended to those standing against the Assad regime & its bombers. If none of this involves international collaboration between activists, it will only be a drop in the bucket of what is needed.

Though adverse to exploiting the tragedy of children, we must look this monstrous war straight in the face & little Omran & Alan compel us to do exactly that.

Stop the bombing of Syria! Full solidarity with the popular resistance to Assad. Open the damn borders.

(Photo of Omran from Aleppo Media Center. Photo of Alan from Reuters.)