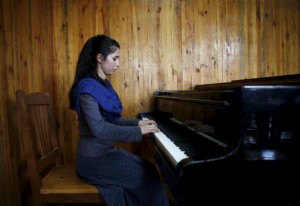 You have to hand it to public relations firms pumping out political propaganda to justify war & colonialism. They’re an imaginative, if not completely shameless, lot. Israel has them on overdrive & the US-NATO has them grasping at straws in Afghanistan.

This war propaganda piece in Reuters is recycled from last year when the Guardian-UK had a feature about the Afghan National Institute of Music (ANIM) in Kabul. ANIM, founded in 2010, is a project of the Afghan government with funding from the World Bank & German government. No mention if the US has given a dime.

The ANIM program was directed at homeless kids after the Afghan government began arresting beggars (mostly children, women, elderly, or disabled). The kids would be put in orphanages & ANIM would select some of them for its music program. It has 200 students now, with a third of them girls. Not a bad start in six years with tens of thousands of street children in Afghanistan & US bombers still raining down.

The Guardian & Reuters both point out that the rich traditions of music in Afghanistan were banned by the Taliban between 1996 to 2001. “Musicians were attacked, instruments broken, & records destroyed” but also Afghanistan is “notorious internationally for harsh restrictions on women in most areas of life” & “even today, many conservative Muslims frown on most forms of music.”

So you see! Fifteen years of US-NATO bombing is a good thing, a music education for kids & emancipation for women–not just from the Taliban but from all those frowning Muslims. They have a beauty parlor now in downtown Kabul so when they get bombed at least their nails are done. And a handful of the tens of thousands of kids made homeless can learn to play the piano like this young woman.

Despite the fact that the US still deploys troops in Afghanistan & continues thousands of drone bombings, this sorry-assed photo is the state of war journalism–or rather war propaganda.

The historic imperative remains: rebuild the international antiwar movement & demand “US out of Afghanistan!” “US out of Iraq!”