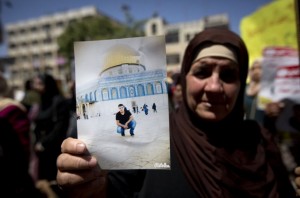 A hallmark of Israeli apartheid is the two separate legal systems operating in the occupied West Bank. Since the 1967 military occupation, the entire Palestinian population has been under Israeli military law while Israeli settlers moving in on Palestinian lands (in violation of umpteen international laws) are under the Israeli civilian & criminal legal system. If that doesn’t signify apartheid, nothing does.

That explains why Israel is one of the only countries in the world that kidnaps & arrests children (mostly for throwing stones); places them in military detention (notorious for abuse & torture of Palestinian children); interrogates them (without parental consent or legal advice) using bullying, abuse, & threats; & prosecutes them in military courts.

According to Addameer, the Prisoner Support & Human Rights Association, as of March 2016, Israel’s military gulag held 7,000 Palestinian political prisoners. Seven-hundred-fifty, including three women, are administrative detainees, which means prisoners held indefinitely without charge; 438 are children, including 98 under the age of 16; & 68 are women. Seven-hundred of the prisoners are reportedly sick. Many are kept for prolonged periods in solitary confinement.

Palestinians have commemorated Prisoners’ Day every year since 1974 as a tribute to freedom fighters vilified by Israel & media as terrorists & demanding their release. Yesterday thousands in the West Bank & Gaza marched holding up portraits of their incarcerated family members, like the woman in this photo.

We can add our own tribute to those freedom fighters & strengthen the demand for their release by honoring & building the economic, cultural, & academic boycott of Israel. Buy nothing with barcode beginning 729.