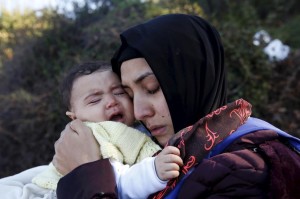 This is a Syrian mother & child after arriving on a raft to the Greek island of Lesbos where the number of refugees is increasing in an attempt to beat the onset of blistering winter.

Are any words necessary? None. Except that if regard for human rights were any part of the refugee crisis wrought by war, they would be moved in passenger ships, trains, & buses & not subjected to the vagaries of inclement weather or barbaric refugee & immigration policies.