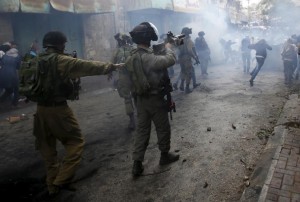 Just so we have the relationship of forces in the occupied West Bank clear in a picture worth a thousand lies:

Israeli soldiers with assault weapons & live ammo are chasing Palestinian protesters in Hebron to break up a protest demanding Israel return the bodies of Palestinians who allegedly stabbed Israelis (heavy emphasis on “allegedly” since no forensic evidence is provided) & were executed without due process by Israeli paramilitary police.

Israel, in violation of numerous international agreements, is now dumping the bodies of executed Palestinians in secret & refusing to return them to loved ones for respectful burial & honors. Once again, we could cite chapter & verse of international law, beginning with the Geneva Conventions, which govern the treatment of the dead, but Israel believes it is exempt from their mandates. That’s called barbarism. It is the legacy of racism, colonialism, apartheid, & ethnic cleansing.

Not to be daunted. Continue to build BDS, the economic, cultural, & academic boycott of Israel (barcode beginning 729) & protest demanding no aid of any kind to apartheid Israel; stop the violence; end the occupation.