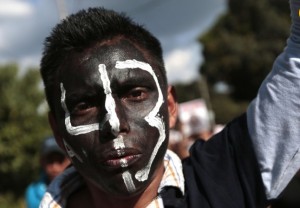 There’s a political symmetry between Mexico & the US that has the potential to change everything to the advantage of the oppressed. For decades, the US has conducted a brutal war on Black youth, including harassment, hundreds of police shootings, mass incarceration. They got away with it all because media drew on fathomless cesspools of racism to persuade people Black youth were feral, dangerous, drug-addicted, gang members.

There was a climate of impunity which cop killers used to full advantage because judges would buy almost anything as an alibi. Even vigilantes like George Zimmerman could take a Black kid out & walk away scot-free.

And then in Ferguson they went too far. The history of why the Black community of Ferguson drew a line against tyranny will have to be written; the participants, the process need to be chronicled because history is never an impersonal dialectic. We want to know those young activists as well as we do Rosa Parks, Malcolm X, & Martin Luther King, Jr., because they are counterposing a new civil rights & Black power movement to the co-optations of Al Sharpton & Jesse Jackson who serve the status quo.

Mexico has been under the tyranny of neoliberal plunder for decades now, in agriculture, industry, & now with the privatization of PEMEX (the state-owned oil & gas company) which is making Mexico a land of oil spills & contaminated rivers. It’s now become a narco-state where crime syndicates & state apparatus converge. To carry that off terror & what activists called a “reign of impunity” were required.

Just in the past decade, thousands have been disappeared, thousands murdered by the military. It’s one of the most dangerous countries in the world for reporters & those who speak the truth because President Peña Nieto & Felipe Calderón before him wanted to assure foreign investors that Mexico was safe for business & open for plunder.

And then they pushed the boundaries of impunity too far when the Mexican police abducted 43 student teachers & handed them over to criminal cartels to dispose of like they were garbage. Ayotzinapa, the teacher’s college they attended, became an international clarion call just like Ferguson. The response across Mexico is shaking the foundations of the Nieto regime & challenging the future of neoliberalism.

Eduardo Galeano, the Uruguayan author of “Open Veins of Latin America: Five Centuries of the Pillage of a Continent” (as cogent today as it was when published in 1971), recently quoted a previous warning of Mexican political activists: “The rulers have lost control of fear; the rage they have unleashed is turning back against them.”

Not only have the rulers lost control of fear & unleashed undaunted opposition movements, but the struggles in Ferguson & Ayotzinapa have tapped the wellsprings of international solidarity too long dormant but drawn into action around Gaza. It’s all of a piece because neoliberalism, the barbaric phase of capitalism, is running out of options to solve its crises & is attempting to do so on the backs of working people.

To borrow & reformulate the declaration of Attica prisoners in 1971: ‘We are human. We are not beasts & do not intend to be beaten or driven as such.The oppressed have set forth to change forever the ruthless brutalization & disregard for our lives here & throughout the world. What has happened here is but the sound before the fury of those who are oppressed.’