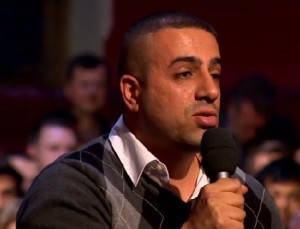 The problem with Norman Finkelstein (as clearly seen in his December 12th debate monitored by Mehdi Hasan) is that he’s completely locked into Oslo Accord-think, despite the utter devastation they have wreaked on Palestinians & the bankruptcy of a bantustate solution. He’s like a broken record replaying the debate around the Accords & one wishes Edward Said were still around to answer Finkelstein since he seems to respect so few other Palestinians.

Increasingly he reveals his deep conservatism about social transformation & one wonders if he regresses politically to defend the existence of Zionist Israel or if he is just psychologically saddled that way.To speak of limiting justice by going no further than “enlightened public opinion” is a mockery of history. To identify “enlightened public opinion” as embodied in international law or represented by European governments is a mockery of reality. But the evidence in this debate suggests Finkelstein is quite flexible about public opinion since he also asserts his right to differ with majority opinion. Why would he deny that right to others?

The Palestinian call for the economic & cultural boycott of Israel (BDS) counterposes to Finkelstein’s legalism & misanthropy a conviction in the possibility of changing public opinion by convincing millions to support the justice of Palestinian demands–& the proof of their conviction are the millions of people around the world today who stand with Palestine.

Salma Karmi-Ayyoub, the Palestinian activist who debated Finkelstein here, spoke with compelling force, but too briefly. One wishes the clutter in this debate (including the Zionist journalist) would be removed so she could stand toe-to-toe with Finkelstein & bring clarity to this dispute.

A Palestinian man in the audience questioned Finkelstein’s disrespect for BDS since this creates division among Palestinian supporters. His question evoked the most revealing outburst from Finkelstein who said he is not pro-Palestinian, that he has “no interest in Palestine” but only in justice. A most regrettable distinction. And a damning one too.