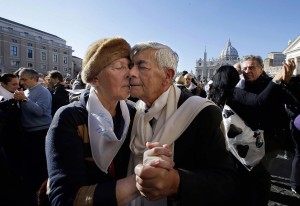 It’s a little disconcerting to know that if there weren’t continents & a vow of celibacy between you, you’d be in the dating range of Pope Francis. Does he even know who Elvis Presley is? Did he ever do the hustle? Why did he take the road less traveled? Maybe we were meant for each other.

But anyway happy birthday to the pope. This is the age when you add “& many others” & really mean it. He could not have celebrated it with a more charming couple than the one here dancing the tango. Looks like they’re still swooning for each other after all these years.