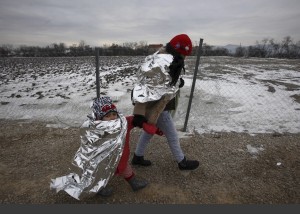 This photo shows the softer, gentler side of EU refugee policy. This refugee mother & child in Tabanovce, Macedonia near the border with Serbia were given thermal blankets for the 180 km/113 mi walk in freezing temperatures from the Greek-Macedonia border. You don’t see humanitarian largesse like that every day.

The blankets were likely given to them by volunteer groups since the UN refugee agency (UNHCR) appears to spend most of its time hand-wringing & shaking the naughty finger about the crisis.

This barbarism is the softer, gentler side of EU refugee policy since this woman & child, most likely Syrians, were actually allowed to cross the Greek-Macedonia border & proceed north. Thousands identified as “economic migrants” are detained in abandoned Olympic stadiums to be processed for deportation or they are kept in Moria, the refugee camp on Lesbos which is more like a concentration camp.

Most reports say Afghan refugees are allowed to cross the border for asylum since they’re fleeing a war-zone but photojournalism belies that, showing especially single Afghan men in the stadiums to be processed for deportation & at Moria.

Moria was an abandoned prison or army base (media can’t get the story straight) with a capacity of 410 which now warehouses up to 4,000 refugees separated by barb wire fencing. Since there aren’t enough shelters, no sanitation, & no garbage pickup, refugees sleep in the rough, often in trash. Volunteers reported a recent scabies outbreak.

Documentation that the EU is flagrantly violating umpteen international laws governing treatment of refugees does not have UN officials jumping up & down like monkeys–like they do when they pass one of their resolutions sanctioning war. Perhaps the EU & UN serve another master than justice & human rights & need to be reconsidered.