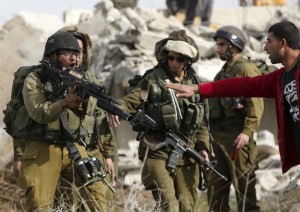 This photo is a Palestinian man arguing with Israeli soldiers, trying to stop the demolition of Palestinian homes in the West Bank village of Beit Ula. The soldiers are there to protect the bulldozers in the process of demolitions.

About 25 percent of Beit Ula (about ten kilometers from Hebron) is located in Area C, a designation of the Oslo Accords which bargained away Palestinian self-determination. Area C, which covers 60 percent of the West Bank, is under complete Israeli control & Israel treats it not like occupied territory but as an annexation.

About 70,000 Palestinians live in Area C but Israel is trying to drive them out with land expropriations & home demolitions. It is the area where most Jewish settlements, all illegal under international law, are being built. Under the colonial policy called the Israeli Law of Return, Jewish settlers are being moved in & Palestinians are being evicted.

This photo explains the vigor of Palestinian resistance to Israeli colonialism which they have the right to oppose by any means necessary. We can stand with them by building & honoring the economic, cultural, & academic boycott of Israel. Buy nothing with barcodes beginning with 729.