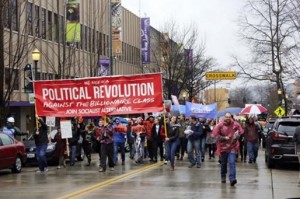 I must be out of the socialists for Bernie Sanders loop since the national March for Bernie came & went yesterday & I didn’t hear a peep about it till it ended. They say it took place in 35 cities but was postponed on the east coast due to inclement weather. Good thing nature intervened since it appears they were sidewalk events most places–though sizable in a few. The indomitable antiwar movement hasn’t drawn sizable crowds for a long time either so no one ridicules a movement for size. Only for folly.

Loath am I to rain on a good parade, but if you want a political revolution it might be better to march for an end to US wars–the very wars Sanders votes appropriations for. Our man has got a movement going. His followers are calling for political revolution. But against what, for what? All things bad & all things good? What about immigration rights, Black rights, Palestinian justice, war & drone bombing–all of which Sanders stinks on?

Some of his supporters criticized the march because they thought participants should have been phone banking, canvassing, registering voters. We’ve heard that one before. Those who put their hope for change primarily in a candidate/savior rarely get off their asses to protest US policies. In elitist, solely electoral politics, protesting is for plebeians or just a waste of time.

Some may think the “Feel the Bern” phenomenon should be seriously analyzed rather than ridiculed. It has been ad nauseam ever since the Democratic Party started throwing up left shills like Sanders. Pardon me if after several decades I leave that chore to others. Sanders’ politics are what interest me & dispelling popular delusions about what his politics really are.

(Photo is March for Sanders in Seattle, WA)