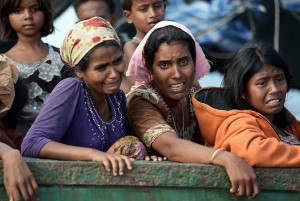 It’s hard to believe it was only a year ago we stood witness to the horror of Rohingya refugees stranded in boats for days without food & water. There still is no accounting for thousands of them & so much criminality on the part of so many governments. Genocide is the name for what we witnessed. We’ve been mentored by media to read about these horrors, feel pity for the Rohingya, then shake our heads in helplessness. Those days of blunted insensitivities & amoral indifference are over. As capitalism spirals into its barbaric phase, we are called to arms in international solidarity & all men & women of good will must respond.

It’s so comforting to know the UN human rights chief is “appalled” at reports Thailand, Indonesia, & Malaysia are pushing immigrants back to sea; that the White House spokesperson ‘expressed concern’ about the refugees, that the US State Department is ‘urging’ countries to work together, & that the US is working with the UN refugee agency to save lives. Because if there’s anything the massive humanitarian crisis in the Andaman Sea needs, it’s more platitudes & hand-wringing–especially of the appalled kind. The Council on Foreign Relations is really worked into a fury over the monumental human rights crimes against the Rohingya in Myanmar & the Andaman Sea. Their man says, albeit with some peeve, Myanmar should “rethink its “racist” plan for the Rohingya.” You can’t talk tougher than that.

The persecution & ethnic cleansing of Rohingya in Myanmar has gone on for decades including being stripped of citizenship; religious persecution; forced labor; land confiscations; arbitrary taxation & various forms of extortion; forced eviction & house destruction; restrictions on travel for health & work; restrictions on marriage, education, & trade. Today, 130,000 to 140,000 homeless Rohingya live in refugee camps in Myanmar & thousands more in camps in Bangladesh. The camps in Myanmar are filthy & wretched & infectious diseases are rampant. Residents are not allowed to leave without police escort so they’re more like concentration camps. The NY Times called them “apartheid-like conditions” but they’re really more like Auschwitz.

When then US Secretary of State Hillary Clinton visited the country in late 2011 & when Obama went there in 2012 & 2014, the ethnic cleansing & flight of Rohingya was in high gear. Media reported “there was much fanfare about the country’s political reforms & apparent road to democracy after decades of oppressive military rule.” There was fanfare, but only if you had your head stuck up your ass because the military still ruled the country without making much effort to camouflage that fact.

The US State Department claims they have a “calibrated” approach to human rights in Myanmar. They like that word; they think they’re being foxy with it. It means the US can maintain some minor sanctions on Myanmar but still do substantial financial business & work out an understanding with the junta so Myanmar can join Thailand & the US in annual military exercises. It’s called talking a good game. Obama calls it “engaging with the country.” And you wonder why so many graduates with international affairs degrees end up as Fox News commentators or driving taxi?

The Australian regime also has a “calibrated” approach. That’s why prime minister Tony Abbott glibly defended turning boats away from sanctuary, as Australia does. When was he released from the criminally insane asylum? He hasn’t even the good sense to talk with “nuance,” the essential tool of diplomacy.

The US claims in the past year it’s sent $109 million in humanitarian assistance for “vulnerable Burmese people, including the Rohingya.” It’s apparent not a dime has gone for that project but given the US track record on promised humanitarian aid, it’s more likely it was actually never sent. Both Obama & Clinton met with Nobel Peace Prize winner Aug San Suu Kyi who spent years under house arrest for opposing the military dictatorship. As a member of parliament now, she remains as mute today as she was in 2012 about the persecution of Rohingya even though she is considered one of the most influential women in the world. But then of course, you wouldn’t ask Obama about peace.

While the Thai navy is pushing refugees further out to sea to die, the Thai government is organizing a regional conference on May 29th to window-dress the crisis. Myanmar is threatening to boycott the meeting if the issue of Rohingya is on the agenda. They don’t have to be there to be condemned or to have sanctions leveled against them. But of course, that won’t happen.

Truth of the matter is, with close up shots like this from journalist boats, we are being offered a front row seat to slow-motion genocide. Journalists are tossing water bottles to the boats; Thai fishermen are passing supplies–but there are no UN vessels in sight. There are no US ships though they could move the 5th Fleet from Bahrain or those warships off the coast of Yemen.

The Thai, Malaysian, & Indonesian regimes are shamed. And so is every other country that could move navies into the Andaman Sea & take the refugees to safety.

(Photo of Rohingya on ships by Christophe Achambault/AFP)