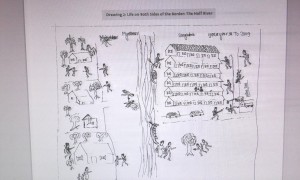 Ziaur Rahman is a 23-year-old Rohingya man who says he, “has history in four countries but a secure home in none.” He grew up in Bangladesh after his family fled persecution in Myanmar–only to be kidnapped by human traffickers last year & shipped to Thailand. He eventually escaped captivity & now works with the UN refugee agency in Malaysia (UNHCR).

His story is horrific & typical of many Rohingya refugees. It needs to be told at length to highlight the gruesome human rights crimes being committed against Rohingya Muslims in Myanmar & in the countries they flee to for asylum.

This is a drawing Ziaur made at the age of 16 while living with his mother in a Bangladesh camp. The refugee camps are not places of tranquil asylum but subject to violence by police & human traffickers. The Naff River in the drawing marks the border between Myanmar & Bangladesh & is the escape route taken by many during pogroms. It featured in the 2012 flight of Rohingya when Bangladeshi border police turned refugees away by force. There are many wrenching photos of Rohingya pleading with border police to let them enter because they had no place else to go.

Our fullest solidarity with the Rohingya struggle against genocide. Like many oppressed peoples, for too long they have stood alone & suffered a sense of abandonment by the rest of the human race. It’s long since time to change that.