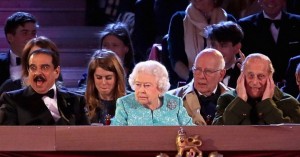 Many people think Betty Windsor an endearing relic of feudalism with a fetish for corgi dogs, horse racing, a cadaverous, flatulent consort, & sponging off the body politic. In fact, she plays a role in British politics & a very unsavory one indeed.

There was an article in the Daily Mail yesterday about the decades-long relationship between the Windsors & the “royal” (for want of a better word) dynasty that rules Bahrain. It made the news because Betty invited “King” Hamad Al Khalifa to her 90th birthday extravaganza. Whether it’s a personal friendship between feudal dynasties or political diplomacy & expedience is of little interest. The relationship says everything you need to know about the corruption of the British moochocracy.

Both the US & UK have strategic political & military interests in Bahrain which conflict with the democratic needs of the Bahraini people & both have been involved in Bahraini military & intelligence training for decades (including training death squads & Saudi national guards deployed in crackdowns on protestors). Along with Yates, a team from Scotland Yard trained & directed the al-Khalifa police force. Both also provide millions in military assistance to the regime.

The UK has a long history of orchestrating police violence in Bahrain. From 1966 to 1998, Ian Henderson, a former British colonial officer led Bahrain’s secret police, gaining the sobriquet, “Butcher of Bahrain” because of the extreme kinds of torture used against thousands of dissidents, including children. Repeated calls for the UK to prosecute Henderson under international law were ignored because of Britain’s close ties with the Bahraini dictatorship. He croaked in 2013 (& good riddance to him though he never faced justice).

None of the recommendations of the international commission on human rights violations were implemented. US & UK involvement has emboldened the regime to escalate violence & repression; they use special force units to round up human rights activists; death squads; torture, beatings, pellet guns, kidnappings, disappearances (including of children); indiscriminate but methodical use of tear gas in residential areas (termed “carpet gassing” resulting in maiming, blinding, deaths); incarceration; house raids; road check points for routine stops, searches, & intimidation.

The murderous Al Khalifa is here seated next to Betty in the Royal Box at Windsor Castle for her 90th birthday celebration. Endearing relic of feudalism?